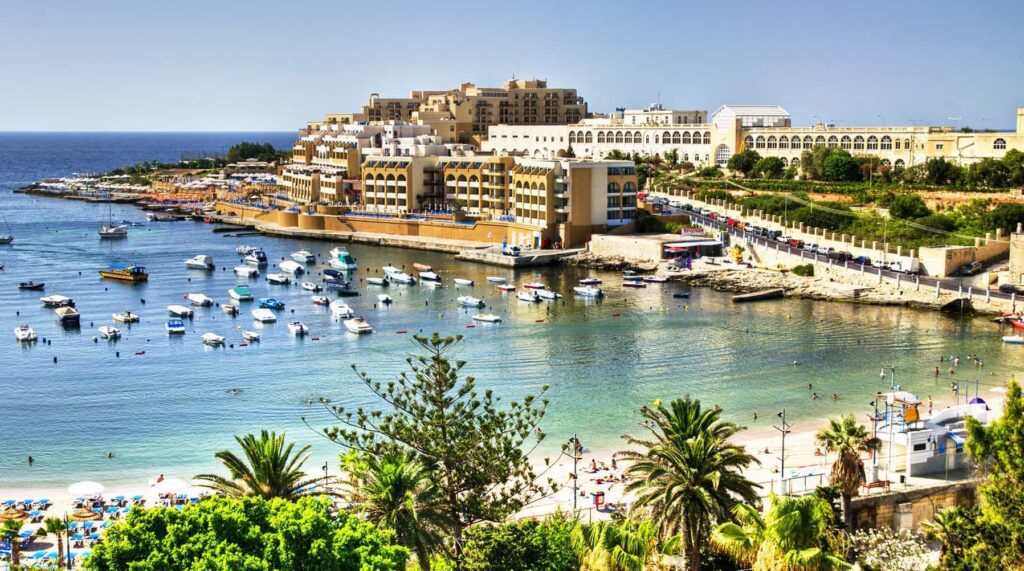 St. Julian’s or San Ġiljan is a Maltese city located along the coast, north of the capital Valletta, known for its nightlife tourism, and the restaurants in the area called Paceville, a district largely populated by nightclub, bar, and pub which is the nerve center of the island’s nightlife.

Before 1800 the area now occupied by St. Julian’s was practically deserted, except for the Spinola palace, the old church, and some houses of the local fishermen.

Despite this, traces of chariots dating back to the Bronze Age were found in the area of Mensija, in the district of Tal-Ballut (in the site now occupied by the Chapel of the Convent of the Sacred Heart) tombs dating back to the Roman era and in ta ‘Cieda were identified. , where Triq il-Korvu (Cappara) is located today, ruins of a Roman tower and a Saracen burial area were found.

The city takes its name from the patron saint, San Giuliano di Sora, also known as Giuliano il Povero or Giuliano Ospitaliero. Before the reform of the Calendar of Saints, San Giuliano was dedicated on January 27; today it is celebrated on February 12th, although in the traditional Maltese holidays it is instead celebrated on the last Sunday of August in the wake of the other celebrations of the period.

St. Julian’s had a notable tourist development around 1960, when Malta gained independence from the United Kingdom; since then it has been a renowned tourist destination due to the presence of various places of interest and entertainment.

Noteworthy is the Bay Street Shopping Complex, which contains a large hotel inside, and where a 23-storey skyscraper was inaugurated in 2001: the Tower of Portomaso, 95 meters high.

Get Started on Your Onsite Internship Abroad

Live and Intern in Exciting Cities of the Europe

This website uses cookies to improve your experience while you navigate through the website. Out of these, the cookies that are categorized as necessary are stored on your browser as they are essential for the working of basic functionalities of the website. We also use third-party cookies that help us analyze and understand how you use this website. These cookies will be stored in your browser only with your consent. You also have the option to opt-out of these cookies. But opting out of some of these cookies may affect your browsing experience.
Necessary Always Enabled
Necessary cookies are absolutely essential for the website to function properly. This category only includes cookies that ensures basic functionalities and security features of the website. These cookies do not store any personal information.
Non-necessary
Any cookies that may not be particularly necessary for the website to function and is used specifically to collect user personal data via analytics, ads, other embedded contents are termed as non-necessary cookies. It is mandatory to procure user consent prior to running these cookies on your website.
SAVE & ACCEPT